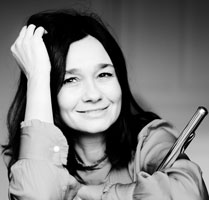 Magali Mosnier is one of the most sought-after flutists on the international concert scene. Since 2003 she has served as Solo Flute for the Radio France Philharmonic Orchestra and also performs regularly in solo projects throughout the world.  Her repertoire encompasses a broad stylistic range, from baroque music to contemporary music.

In addition to her activities as a performer, Magali Mosnier has a passion for flute pedagogy. Before accepting teaching positions in 2016 at the Conservatoire à Rayonnement Régional de Paris and the Pôle Supérieur de Paris, she assisted José-Daniel Castellon for two years at the HEMU in Lausanne. Magali also regularly gives international masterclasses.

Magali Mosnier is a prolific recording artist. She has recorded four acclaimed albums for Sony Classical: “Fantaisie”, “Bach”, “Mozart” and “Mozart's Concerto for flute and harp” with Xavier de Maistre. She also collaborated on numerous recordings of chamber music by Ravel, Dutilleux, Lenot, Lefrancois, including a recent recording of Debussy's Sonata for flute, viola and harp with Antoine Tamestit and Xavier de Maistre for Harmonia Mundi.

This 2021-2022 season’s engagements include the following performances: Cologne Philharmonic with Antoine Tamestit and Marie-Pierre Langlamet, in Ravensburg with Éric Le Sage and François Salque, in Vienna with Wiener Symphoniker, soloist with Kammerakademie Potsdam in Vivaldi's Four Seasons, soloist with the Sinfonieorchester Basel in Alexandre Desplat's Concerto, and soloist with the Freiburg Philharmonic Orchestra in Philippe Hersant's Concerto.