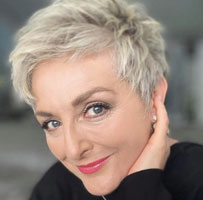 Born in Belgrade, Snežana Stamenković studied singing with KS Professor Biserka Cvejić at the Belgrade University of Arts where she received the Danica Mastilović award, the “October Award of the City of Belgrade for exceptional artistic achievement", and the Bahrija Nuri-Hadžić (Alban Berg’s first Lulù) award as the most talented singing graduate. She also began her vocal pedagogic career at the Belgrade University of the Arts as an assistant to her teacher Professor Cvejić.

In 1987 she won first prize at the ‘Concours International de Chant Mme. Mady Mesplé’ in Nantes as well as the FIDOF prize for the best Lied and Mozart interpretation. In the same year she made her debut at the Belgrade National Opera as Susanna in ‘Le Nozze di Figaro’. This was followed by engagements in Zagreb as Ilia in the first ever performance in Yugoslavia of Mozart’s ‘Idomeneo’. Further engagements at this time included Susanna in Ljubljana.

After permanent engagements in Trier and Bern, she was engaged at the Leipzig Opera from 1997 where she sang many of her most important operatic roles including Micaëla, Nedda, Mimì, Tatjana, Pamina, Donna Elvira, Contessa (‘Le Nozze di Figaro’) and Marie (‘The Bartered Bride’). She has performed in opera and concert in Zurich, Leipzig, Dortmund, Hannover, Antwerp, Paris, Nantes, Warsaw, Athens, Linz, Innsbruck, Bonn and Belgrade.

Since April 2002 Snežana Stamenković is Professor of Voice at the Mannheim State   University of Music and Performing Arts where she became head of the vocal department in 2007.