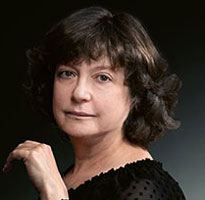 The Russian pianist Anna Malikova was born in Tashkent, Usbekistan, where she received her first piano education at Uspensky School in the class of Tamara Popovich. At the age of 14 she came to Moscow and was accepted into the class of Lev Naumov - first at Central Music School and later at Tchaikovsky Conservatory. After her studies she worked several years as assistant of Lev Naumov at the conservatory.

Being prizewinner at the international piano competitions in Oslo, Warsaw (Chopin) and Sydney, Anna Malikova started her concert career in the former Soviet Union, later also in the West. Eventually she was 1993 awarded 1st Prize at the Int’l ARD Competition in Munich and established as a consequence a worldwide concert career. Frequent tours took her through most countries in Europe, the Americas, China, Japan, Korea. Her activities include recitals, concerts with orchestras, masterclasses and invitations to sit on juries of international piano competitions.

Likewise, Anna Malikova is constantly expanding her CD repertoire. Many of Chopin's most important works as well as recordings of works by Schubert, Liszt, Shostakovich, Prokofiev and Soler are available on the Russian label Classical Records. Her integral recording of the five piano conceertos by Saint-Saëns with the Radio Symphony Orchestra Cologne and Thomas Sanderling received unusual international acclaim and was 2006 awarded with the Classical Internet Award. Recent productions include the 2nd Piano Concerto by Brahms with Duisburg Philharmonic Orchestra conducted by Jonathan Darlington, the 10 piano sonatas by Scriabin and as latest production the two piano quintets by Schumann and Schostakowitsch, in cooperation with Belenus Quartet from Switzerland.

Since October 2018 Anna Malikova holds a position as distinguished professor at the University for Music and Performing Arts in Vienna.