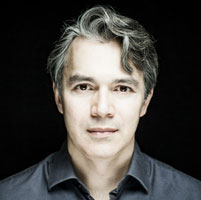 Born in Venice in 1967, De Maria studied piano with Giorgio Vianello and Gino Gorini. Revealing a precocious talent, he won First Prize at the Alfred Cortot International Piano Competition in Milan at the age of 13. He graduated from the Conservatory of Venice and continued his studies with Maria Tipo at the Conservatory of Geneva, where he obtained the Premier Prix de Virtuosité with the highest honours in 1988.

After receiving the Critics' Prize at the Tchaikovsky Competition in Moscow (1990), Pietro De Maria won First Prize in other prestigious international piano competitions, such as the Dino Ciani - Teatro La Scala in Milan (1990), the Géza Anda in Zurich (1994), and the Mendelssohn Award in Hamburg (1997).

His repertory ranges from Bach to Ligeti and he is the first Italian pianist to have played Chopin’s complete piano works in six public concerts. More recently, he has been focusing on Bach, presenting both books of The Well-Tempered Clavier as well as the Goldberg Variations in his concerts.

He has recorded Chopin’s complete piano works, The Well-Tempered Clavier and the Goldberg Variations for Decca, receiving important acknowledgments from international publications of prestige such as Diapason, International Piano, MusicWeb-International and Pianiste.

De Maria has also recorded three Sonatas by Clementi for Naxos, a live recital at the Miami International Piano Festival for VAI Audio, Beethoven’s complete works for cello and piano with Enrico Dindo for Decca and a CD with selected piano works by Fano for Brilliant Classics.

Pietro De Maria is Academic of Santa Cecilia and teaches at the Mozarteum University in Salzburg. He is a member of the Scuola di Maria Tipo teaching team organized by the Academy of Music in Pinerolo.