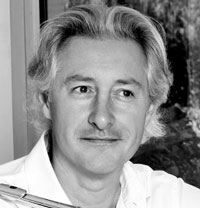 Having studied in Lyon in the classes of Marius Beuf (C.N.R.) then Maxence Larrieu (C.N.S.M. 1st prize in 1985), José-Daniel Castellon shows a remarkable musical and flutist precociousness. At the age of 19, he was appointed by John Eliot Gardiner and the Orchestre National de l'Opéra de Lyon and won the Geneva International Music Competition in the same year.

Passionate about pedagogy, he became a Certified Teacher at the age of 25, teaching at the C.N.R. of Lyon for 13 years, then at the Geneva Conservatory during the 2001-2002 season, before being appointed in 2004 flute professor for professional classes at the HEMU - Haute Ecole de Musique de Lausanne.

More and more frequently, he is invited to be member of the jury of major international competitions for flute: Maxence Larrieu Competition (Nice), Domenico Cimarosa (Aversa/Italy), Jean Français (Paris), amongst others.

José-Daniel Castellon's musical activity has always shown profound versatility. He plays regularly as a soloist with orchestra (he maintains a privileged relationship with the "Concert Européen"), but is particularly fond of chamber music and plays with piano, harp, string quartet, percussion, guitar, harpsichord or with the trio "Pierre de Ronsard" which he founded in 1998 with his friends Isabelle Moretti (harp) and Nicolas Bône (viola), moving happily from early music, which he plays on an ebony flute by Chris Abell, to contemporary music (creation of works by e.g. C. Ballif, O. Haugland, J. Dorival).

In 2019, his recording of the concert works of André Jolivet and Frank Martin, together with the Orchestre de Chambre de Lausanne and Les Percus Claviers de Lyon, conducted by Nicolas Chalvin, is released by Claves Records. This recording was awarded a "CHOC" by Classica, which concluded its review as follows: "The present version is a new reference."