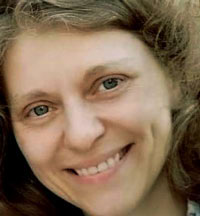 Based in Varese and Perugia, Italy, Antonia Sfrangeu is pianist, pedagogue and Feldenkrais® Practitioner.
Since 2009, she is teaching at the Ars et Labor Association, Perugia, where she specializes in teaching piano, ear training, musical theory and Feldenkrais Method® for children.
Born in Botosani (Romania), she began her musical studies in her hometown and then pursued them at the “Dinu Lipatti” Conservatory in Bucharest.
After moving to Italy, she attended intense masterclasses with Christa Bützberger and Marina Rossi, where she started to approach the Feldenkrais Method® and the phenomenology of music music as outlined by the conductor Sergiu Celibidache; these two disciplines together form the ground of her thinking and, consequently, of her work as a musician and as a teacher.
She studied chamber music with Maestro Franco Rossi and specialized in opera singing with the soprano Tatiana Chivarova. She graduated in piano in 2003 at the Conservatory of Trento and in 2004 at the three-year course ARS ET LABOR.
She gave numerous concerts in Italy and abroad and won prizes in national and international piano competitions such as Città di Pistoia, Liburni Civitas and Giulio Rospigliosi. She performed Sergej Rachmaninov’s piano concert op. 18 n.2 with the Orchestra Filarmonica de Stat Botosani.
Currently she lives in Italy where she carries out an intense musical teaching activity. She collaborates with various associations following and realizing numerous musical and Feldenkrais® projects. She regularly performs as a pianist and as a singer.