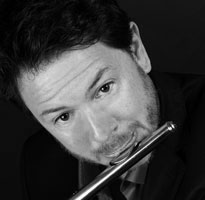 Currently Principal flute at the Swiss Romande Orchestra in Geneva, Loïc Schneider is certainly one of the most accomplished flutist of his generation.

After beginning his studies in Strasbourg, his home town, he went to study in Paris, first with Claude Lefèbvre in CNR de Paris then with Sophie Cherrier in the prestigious CNSMDP, where he graduated in 2005 with a first prize.

It’s even before the end of his studies, in 2004, that he won the audition as Principal flute in the Orchestre National de Lorraine in Metz ( France), a position that he holds during 5 years, before being appointed at the Swiss Romande Orchestra by Maestro Janowski in 2009.

All those awards opened him the doors of the greatest concerts halls and festivals all around the world, more specifically in Europe and in Asia, as a soloist of course but also as a chamber music player.

Since 2015 Loïc Schneider is teaching in the HEMU Lausanne as assistant in José-Daniel Castellon’s class, which allows him to balance perfectly his activities as a soloist, an orchestral player, and a teacher.