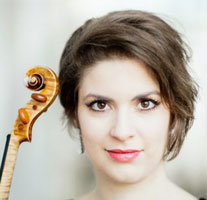 In October 2020, at the age of 27 she has been appointed violin professor at the renowned University of Music and Performing Arts in Vienna.

In addition to her career as a soloist, she performed at renowned chamber music festivals and academies: the Verbier Academy, Hitzacker Festival and Academy and the Heidelberger Frühling Academy.

Ioana Cristina Goicea was born into a family of musicians in Bucharest in 1992. She started violin under the guidance of her mother, violinist Cristina Anghelescu and her grandfather, violin pedagogue Aurelian Anghelescu.

She plays a modern Violin by Jürgen Manthey (Leipizig, 2021)