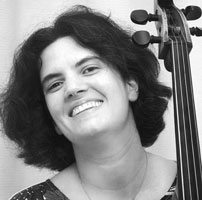 Héloïse Piolat was born in Paris. She won at a very young age the «Premier Prix en violoncelle et musique de chambre», then she decided to continue her musical studies in Germany, in part thanks to the grant received from the D.A.A.D, under C. Henkel at the Musikhochschule in Freiburg i. Br. and then under H. C. Schweiker in Aachen, where she graduated with distinction in 2007.

She attended various masterclasses, run by W. Christ, J. Starker, R. Pidoux, V. Erben, W. Böttcher, C. Wynecken, and others. She received a grant from the Yehudi Menuhin Foundation, and she has given many concerts both as a soloist and as a chamber music performer in France, Germany, and Italy, as well as with the Gustav Mahler Jugend Orchestra.

From 2006 to 2009, she attended the ARS ET LABOR Corso superiore di formazione musicale (Advanced Course on Music Education) in Vicenza, receiving a grant named after the great cellist Franco Rossi that allowed her to perform with the maestro’s Bazin bow. She gives concerts in Italy and abroad in a duo formation with Christa Bützberger, with Trio ARS ET LABOR and with the ARS ET LABOR Instrumental Group.